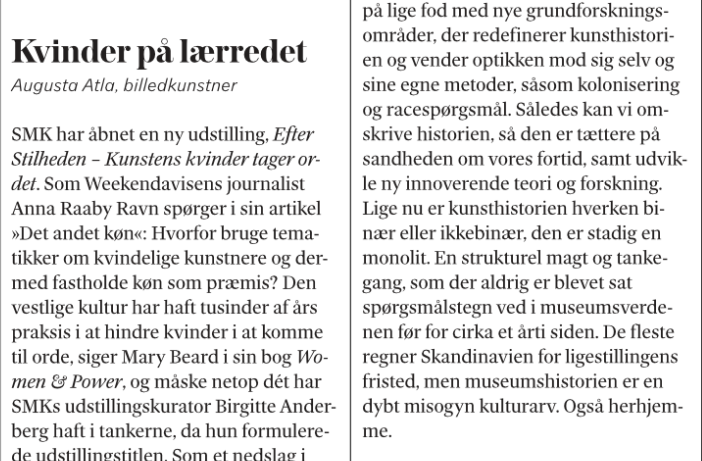 Women Artists on the Frontier

The National Gallery of Denmark (SMK) has opened a new exhibition, After the silence – Women of art speak out. In her article, the journalist Anna Raaby Ravn asks Det Andet Køn (The Second Sex) (Weekendavisen): Why use female artist-related themes, thereby perpetuating gender as a premise?
In her book Women & Power, Mary Beard points out that Western culture has had thousands of years of practice in silencing women. Perhaps that is precisely what Birgitte Anderberg, the curator of the exhibition at SMK, had in mind when she came up with the title of the exhibition. Zeroing in on the museum’s own practice, the title attempts to describe the great problem of art research: that art history as practice, theory and dissemination is based on one gender – founded, established, curated, written down by, and reduced to this single gender: (white) men. That is why it is crucial to talk about female artists. They have been forgotten, they have not been heard, their works have not been shown or, as the French art historian Camille Morineau has said, they have simply been erased from history. Isn’t it time to acknowledge gender as part of the theory and method of basic research? Gender is not just a trend that fills in gaps in the history of art, but also an essential part of art history and art theory, on equal footing with new areas of basic research – for example, colonisation and race issues that redefine the history of art, forcing it to take a long hard look at itself and its methodology. Thereby, we can rewrite history so that it more closely reflects the truth about our past, while also developing new, innovative theory and research. Right now, art history is neither binary nor non-binary. It remains a monolith, a structural power and way of thinking, which the museum world never even questioned until about a decade ago. Most people regard Scandinavia as a haven for equality, but museum history is a deeply misogynistic cultural heritage – even here in Denmark.